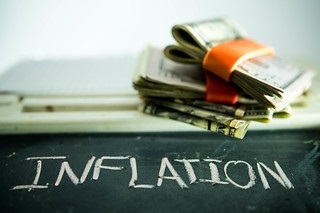 Many people talk about inflation.  Even though news stories about inflation are common, I would be surprised if many people could give an accurate definition of what it is.  So, what exactly is inflation? Put simply, the inflation rate tracks the cost of all goods and services within an economy.

The U.S. government wants some inflation, but not a lot.  The U.S. Federal Reserve has aimed to keep inflation below 3% for the last 20+ years, and, for the most part, they have done a pretty good job of that.

Capitalistic societies like the U.S. and Europe want some inflation because it helps to increase wages. Wage increases keep employees happy. It is beneficial to the overall economy. That is why low inflation is considered to be a good thing.

Inflation can also be bad.  There is a large segment of the population that does not see an annual increase in their income: retirees.  Many retirees rely largely on fixed pensions and/or Social Security benefits for their primary source of income.  For those with a fixed income, like retirees, inflation is bad and high inflation can be downright devastating.

Any inflation above 3% exposes the economy to risk.  High inflation means that the costs of goods and services are going up faster than wages.  It creates financial hardship for both working and retired individuals.

The last time we saw high inflation was the late 1970s and early 1980s.  It was up over 10% per year for quite a few years. That kind of inflation creates a lot of hardship for people.

Deflation can also pose a risk.  Deflation occurs when the cost of goods decline and wages remain low or decline as well. When demand falls, so do the prices of goods and services. When businesses make less profit on each item sold, they have to cut wages.  When wages fall it pushes the economy down even further.  The best example of deflation is the Great Depression. An economy with deflation is a very bad economy.

The bottom line is that governments like a little bit of inflation. It helps wages go up which makes people feel a little bit better.  Too much inflation will hurt the economy.  That is why the Federal Reserve works to manage inflation by raising and lowering interest rates.  Hopefully, it works to influence the economy to keep wages and the cost of goods and services in check.

Understanding some of the basics about inflation should help you to be a better consumer of financial news and will give you a better understanding of what the talking head are saying when they discuss it.

If you would like to learn more about inflation or discuss the ways that it might impact your personal financial situation, contact us and we would be happy to have a more in-depth conversation about your questions and concerns.